H.323 is a standard that specifies the components, protocols and procedures that provide multimedia communication services: real-time audio, video, and data communications or any combination of these elements over packet networks, including Internet protocol (IP) based networks.

H.323 was originally created to provide a mechanism for transporting multimedia applications over LANs but it has rapidly evolved to address the growing needs of VoIP networks. One strength of H.323 was the relatively early availability of a set of standards, not only defining the basic call model, but in addition the supplementary services, needed to address business communication expectations. H.323 was the first VoIP standard to adopt the Internet Engineering Task Force (IETF) standard Real-Time Control Protocol (RTCP) to transport audio and video over IP networks, with additional protocols for call signaling, and data and audiovisual communications.

The H.323 standard specifies four kinds of components, which, when networked together, provide the point-to-point and point-to-multipoint multimedia-communication services:

H.323 terminal options include support user equipment interfaces, audio and video CODECs, the T.120 data protocols, MCU capabilities and an H.225 component called RAS (Registration/Admission/Status) which is a protocol used to communicate with a Gatekeeper.

The non reliable end-to-end service (UDP, IPX) is mandatory for the audio channels, the video channels and the RAS channel These services can be duplex or simplex and unicast or multicast depending on the application, the terminals capacities and the network configuration.

These services include the translation mechanism for call signaling (for example H.245 to H.242), data transmission (for example H.225.0 to H.221), and audio and video transcoding.

The Gateway also does the translation between audio and video CODECs if this is needed as well as performs call setup and clearing.

Gateways satisfy part of the interoperability vision of H.32x products due to the ability to connect to each other.

Gateways can serve the following purposes:

In this case, gateway functions are similar to an MCU for connecting people over networks. Typically, though, the gateway is the translation mechanism in a point-to-point connection, where only one endpoint is an H.323 device. On the other hand, an MCU typically connects many H.323 devices in a multipoint conference.

Gatekeepers provide network services to H.323 terminals, MCUs, and gateways. H.323 devices register with gatekeepers to send and receive H.323 calls. Gatekeepers give permission to make or accept a call based on a variety of factors.

Gatekeepers can provide network services such as:

Gatekeepers perform two important functions. The first is address translation services between aliases for terminals and gateways and IP or IPX addresses.

The second Gatekeeper function is bandwidth management. For instance, if a LAN manager-specified threshold for the number of simultaneous conferences on the LAN has been reached, the Gatekeeper can refuse to make any more connections.

The collection of all Terminals, Gateways, and Multipoint Control Units managed by a single gatekeeper is known as an H.323 Zone.

A Gatekeeper takes care of the following services if is present (it is not always necessary):

A Multipoint Control Unit (MCU) in an H.323 conference, also called conferencing servers or conferencing bridges, is an endpoint on the H.323 zone that allows three or more H.323 terminals and gateways to connect and participate in a multipoint conference.

A multipoint controller is a component of H.323 that provides negotiation capacity with all the terminals to carry out different communication levels. Also, it can control conference resources such as video multicasting.

An H.323 proxy server is a proxy specifically designed for the H.323 protocol that examines packets between two communicating applications. Proxies are able to determine the destination of a call and perform call-connection steps, if necessary.

The most known protocols used in H.323 are:

It manages the following functionalities:

The following codecs are recommended by the H.323 standard (for more details see H323 Audio and Video Codecs):

For some possible H323 (and SIP) VoIP clients you can check this list The only two that support both H323 and linux are:

Another option is the commandline ohphone, directly derived from the OpenH323 project protoclo stack by the same developers team. It has no graphical interface but it's recommended for testing purposes.

Ekiga can be downloaded from the ekiga page. The OPAL and PWLIB libraries have to be installed first. This is a tedious and time comsuming process (lots of compiling needed). Our own Ekiga experiences can be found at Ekiga

Kphone is another SIP client used to shortly test the basic setup of Asterisk.

Very straightforward download from SJ Labs (VoIP software). You get the following interface. 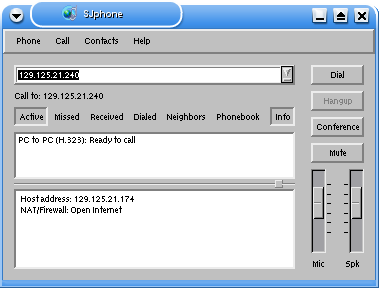 Note: At least the Windows version of SJ-phone is still using SIP, even when this is disabled in the configuration. When using 2 instances of SJphone, to call eachother, the connection is true H323.

We tried to look up some information on H323 and TrixBox. From the information on the web it seems that this is a tricky topic. Many questions, few answers. People seem to have trouble with it. I haven't been through all the correspondence on the TrixBox forum but it seems that most people have a hard time even setting up a connection (lots of configuring) and when they do succeed the connection dies after 15-30 seconds. We will look into this a bit more tomorrow.

In the following example we could see a H.323 call. The different colors show different protocolos.

In this phase a negotiation using H.245 protocol is opened (conference control), the interchange of the messages (request and answer) between both terminals establishes who will be the master and who the slave, the capacities of the participants and the audio and video codecs to be used. When the negotiation finishes the communication channel is opened (IP addresses, port).

The main H.245 messages used in this step are: